About my music Journey in a Slovenian article… and to your request I translated it! ;)

Heey my dear, hope you’re days are warm and filled with lots of Magic! We just started to experience the hot summer weather, which after a very cold Spring time is very refreshing and welcome ^_^

Today I was surprised with the news that my interview was released in a local newspaper! For the first time I was featured across the whole page!! Almost a bit surreal. Thank you Universe! <3

Although a note to my future self – next time I’ll be expecting an interview, make sure to be prepared for a random photoshoot! Gosh do I feel uncomfortable seeing this picture… despite all the internal work we did, I guess we still battle some insecurities from time to time, right?

Anyways… I did a poll on Instagram, where I asked you if you’d like the translation of the article, that’s written in Slovenian language… and to your great request, I did! :))

Here’s the image of the article I was featured in: 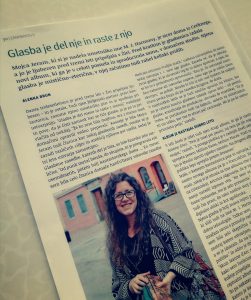 And here’s the translation of the article. Hope you’ll enjoy it, and maybe learn something new about the Journey 😉 Blessed be, my Magical friend, and wishing you a happy weekend! :)) <3

Music is a part of her and grows with her

Mojca, who gave herself an artistic name M.J. Harmony, recently released a new album, that was made completely by herself in her own home recording studio. She composes a mystical ethereal music, where we can also sense a bit of celtic vibes.

Today a 30-year-old was brought to our town three years ago by Love. Her life partner, as she says, also understands her artistic side and encourages her with her work. »Music is part of me and grows with me,« she continues and explains that she’s a completely self taught musician. Since a small age she was attracted by music. »Even back when I was little, me and my mom always sang while doing the house work.« Later in life she was also a member of many music groups, which due to the different goals and ambitions eventually split up. She’s on a solo path for three years now.

Music groups, of which she were a part of, were in various genres. »From punk metal band to an 80’s rock band, after that a member of a singer songwriter’s duet… For a month I was also a member of a Slovenian hard ‘n’ heavy rock band Hellcats,« counts the artist, who now creates New Age music. She’s aware that she chose a niche, that’s quite unknown to the Slovenian public, but hopes that this will change in the future. »It’s one thing to create national-entertaining or rock music, but New Age is a bit outside of the frames,« she laughs. Maybe Slovenian people will most likely know Enya or Enigma from this genre, she adds.

In her teenage years she also taught herself to play guitar. But because her entire music album is her own work – from writing to arranging to production, she’s trained in other things as well. »If there’s a need, I test myself on the drums as well, or sit behind the keyboard. It’s not that challenging because I enjoy these things. Although singing is still the top one priority,« she explains.

The creation of an album took place for about a year.

The language, in which the author mostly sings, is in English, the title of her album is in French. We wondered, why she chose the name of the album Jeanne D’ Arc. The author responds, that her story made a great impression on her in the past. »When I first encountered the story of Jeanne d’ Arc, I was blown away by her Strength.« In these times she felt it was the right time to entitle her new album, which was released in both digital and physical form.

Her music is more known to listeners from other countries; as an artist, who goes by the name M.J. Harmony, uses a lot of modern technology. »Every since I’m creating solo, I mostly interact with others with the help of social media. At first I was quite sceptic about my specific music genre and I didn’t know what to expect from the listeners. Eventually it turned out that through social media I can truly find my audience.« And the reaction is good, which makes her really happy.

»Through Jeanne D’ Arc you can see my development in mental perception, how I functioned in different chapters of my life and how my experiences brought me to where I am today. It’s a conceptual album, where I grow with it.«

Some songs from the album already got the visual presentation (meaning music videos), for which the singer songwriter took care of it on her own. She admits, that being a diy artist (meaning: do it all yourself) is quite a challenge, but she hopes, that her hobby will eventually become her work. She studied to be an art teacher, but she never saw herself as a teacher, because she was always the artistical spirit. »I also love to paint and I was just thinking of having a short break from music and make a few paintings on canvases,« she tells and somehow adds that her goal is eventually combining both music and art under the same brand and her art will be a part of her merchandise.